If you have read some of my blog posts recently, you have probably noticed that I love writing about relationships.

Do you know why?

Because I really believe that relationships are the cornerstone of our life.

No man is an island. We need other people to be happy.

And I also believe that nowadays more than ever it’s really easy to make hasty decisions at the expense of our relationships.

In our Western society, after all, the pace of life is so fast that we struggle with slowing down and thinking twice, before making a decision and before taking action.

Don’t get me wrong; if you follow me, you know that I am a great believer that making decisions and taking action is a game-changer for our personal development.

The only way we can grow and make a breakthrough is when we step out of our comfort zone.

Yet, in other aspects of our lives, e.g. our relationships, rush, and impulsiveness can be detrimental.

Above all, if we consider that different people have different beliefs, ideas, past experiences, needs, and ultimately a different outlook on life.

Let me highlight what I mean by means of the following inspirational story.

THE KING’S MINISTER AND THE WOLVES 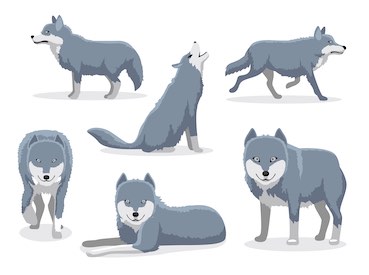 Once upon a time, there was a king who had a pack of wolves.

He kept them to punish whoever misbehaved, made mistakes, and didn’t agree with him.

One day, one of the most trusted and beloved king’s ministers challenged the king’s point of view!

The minister had completely different ideas about how the king should rule his kingdom and he was not afraid to tell him.

The king felt insulted, became furious, and, without thinking twice or taking into the slightest consideration the minister's point of view, commanded his guards:

“Throw him to the wolves! How dare he challenge me? He doesn’t deserve to live any longer”!

The humble minister was stunned by the king’s impulsive decision.

He had fairly served him for 10 years and could hardly believe that the king wanted to inflict such a horrible punishment on him, just for expressing his different point of view.

And then, the minister, prostrate with dismay, lay wailing on the ground while pleading:

“Your Majesty, I have loyally served you for ten years, yet you are going to throw me to the pack of wolves.

Could I kindly request you to grant me 10 more days before being thrown into the jaws of wolves?

The king was moved and after a while replied:

“You are granted 10 more days to fulfill all your desires, except asking to be spared”.

Having received the king’s permission, the minister went to the guard who was in charge of taking care of the wolves and told him:

“I would like to take care of the dogs for the next 10 days, I will feed and look after them, you deserve a break”.

The guard, surprised by that unusual request, agreed and let the minister take care of the dogs.

After all the king had ordered everyone to fulfill whatever wish the minister might have.

For the following 10 days, the minister attended to the wild dogs with love and dedication.

He pampered the ferocious animals as if they were his children, he fed them with fresh delicious food, bathed them, and played with them.

What nobody knew was that the minister, before being appointed minister, had been a stray dogs’ keeper, hence he had a knack for training wild animals.

The 10 days went by; it was time for the minister to be thrown to the wolves.

When the order was carried out, the king and the onlookers were puzzled.

They couldn’t believe their eyes, instead of devouring the minister, the wolves started licking him, joyfully wagging their tails and playing with the minister.

“What has happened to the wolves? Why are they not tearing him to pieces”?

Everyone remained mute except for the minister, who replied:

“Your Majesty, I served these wolves with the same love and attention I showed you, and even if it was just for 10 days, they have not forgotten what I did for them.

On the contrary, I loyally served you for 10 years, yet, you have forgotten all I did for you during this long time just because I expressed a different point of view from yours”.

The king was moved for the second time, and he was ashamed as well.

He commanded his guards to free his minister.

After apologizing the king asked him to go back to the palace and resume his loyal service. The minister accepted the king’s offer and they lived happily ever after.

The king learned an important lesson: impulsiveness should never jeopardize our relationships, above all the long-lasting and close ones.

The king’s impulsiveness almost caused the end of a long-lasting and close relationship.

Nowadays, most people tend to forget what other people have done for them to the point that on the first occasion, e.g. a misunderstanding, a disagreement, the lack of self-control, and impulsiveness can result in the end of a relationship.

I still remember when I ran the risk of jeopardizing the relationship with my beloved father forever.

One evening we were having dinner with some friends, when, while we were chatting, I started expressing my point of view about how my dad was leading his life - I disagreed with the way he used to spend his spare time.

I wanted my point of view to prevail on him.

In a nutshell, I wanted to be right and I expected my dad to change.

He felt insulted and he started shouting at me.

Before long the atmosphere became terrible, to the point that I made an impulse decision, i.e I would stop speaking to him.

I spent more than one year without speaking to my dad, but thankfully, in the end, I realized how naively I had behaved and how much we were both suffering.

I also realized that I had forgotten everything my dad had done for me, i.e. all the years he had looked after me, all the money he had spent on my education and on my health, and much more.

So, overcoming my pride and my ego, I got back to my father and I apologized for my impulsiveness and for not respecting him.

Since then the quality of our relationship has been skyrocketing.

Both of us have become aware that no one’s point of view should prevail over someone else’s and no one should expect to change someone else.

Everybody must always respect their fellow human beings.

We should learn to accept other people’s points of view, respect them, by bearing in mind that everyone has their unique story and so what can appear “white” to someone, can appear “black” to someone else and vice versa.

The world is beautiful because it is varied!

So, next time you are having an argument with somebody, step back, think twice, don’t allow your impulsiveness to take over.

“Impulsive actions led to trouble, and trouble could have unpleasant consequences”. - Stieg Larsson

Life is too short to hold grudges, so let’s forgive!

2 thoughts on “BEWARE: BEING IMPULSIVE CAN SPOIL YOUR RELATIONSHIPS”