Even if I have already said it in some previous posts, I want to stress once more that in our capitalist societies we are led to think that the more we have the better.

The measure of happiness and success is measured by how much money and possessions someone has.

As a matter of fact, no matter how much you can accumulate, when you believe that the more you have the better, you are doomed to feel that there is always something more to get and so you can never feel satisfied.

What you have is never going to be enough!

Possessions may give you temporary pleasure, but it doesn’t last long.

And you become addicted to the pursuit of immediate gratification.

As a result, you are never content with what you currently have, you always look for the next thing to pile up, you always long to meet the next arising desire.

What’s worse, in this race, most people end up competing with one another.

This competition leads people to become selfish, greedy, and less compassionate, and this results in poor relationships, which are the prerequisite for a happy and healthy life.

When people want to climb the social ladder, they are willing to do anything to get what they want, even at the expense of their fellow human beings.

They only think about themselves, developing a predator mindset.

As studies show, people who are socially and financially better-off are more likely to cheat, to lie in negotiations, to take valuable goods from others, in a nutshell, to behave unethically.

Whenever the occasion arises, they don’t hesitate; they pursue their personal success to the detriment of other people around them.

Now, don’t get me wrong, I am not saying that only wealthy people apply the above patterns of behaviors, as a matter of fact - unless you live in an isolated monastery - everyone is affected by the environment they grow up in.

As I wrote above, we live in a society that pushes us to be competitive and prioritize our own interests at the expense of our fellow human beings, and this, in turn, results in overlooking vital concepts such as cooperation, compassion, and a sense of community.

Having said that, I look up to people, who - no matter whether they are wealthy or hard up - give away their time, money, or anything else that can add value to others, because they have understood that what you give, you receive.

Considering that human beings are creatures of habits, the more they do something, the more they reinforce it; it is of paramount importance in order to feel happy to become aware that where greed arrives, happiness leaves.

I will make the above concept crystal clear by means of the following inspirational story.

THE PRIEST AND OUR LORD 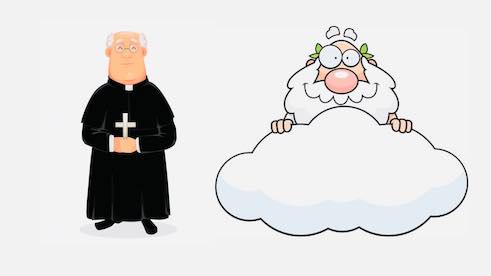 Once upon a time, there lived a priest who was granted one wish by our Lord.

“You have been so altruistic and kind for your entire life that you deserve to be rewarded”, God said to the priest.

The incredulous man replied: “My Lord, before I pass away, please show me both Hell and Heaven”.

God decided to meet the priest's request and told him: “Over there, are the doors leading to the two places you have asked for, judge by yourself and find out which leads to Hell and which to Heaven!”.

The priest opened one of the two doors and was stunned by seeing a magnificent Dining Hall.

There was a huge table in the room, and it was covered with the most delicious food and drinks.

However, the most miserable and unfortunate-looking people were sitting at the table.

The priest wondered: “How on earth can those people look so miserable and starving despite all the good things in front of them”?

Then, by looking more closely, he noticed that the people had such long-handled spoons bandaged up to their arms that they couldn’t bend their elbows.

They were constantly fighting with each other to grab as much food as possible.

But, no matter how much effort they put in, they could never reach their mouth.

The sight of their misery and suffering gave the priest the shivers and he exclaimed: “That must be Hell”!

The priest could not stand such terrible suffering any longer and so he left the room.

He then opened the second door, and to his surprise, he saw a Dining Hall which looked exactly the same as the one he had just left.

There was a huge table covered with the same delicious food and drinks.

The people who were sitting around the table had the same long-handled spoons tied to their arms.

Yet, they looked well-nourished and healthy.

They were happily and joyfully talking and laughing with one another.

“I can’t understand my Lord!”, the puzzled priest exclaimed.

“You see, my son, those long-handled spoons don’t allow you to feed yourself, but you can always feed the person close to you, and be fed in return”, God replied.

He then went on: “In this place, where peace and happiness reign supreme, people have learned to feed and look after one another.

On the contrary, in the other room, people are so greedy that they prefer to starve to death, rather than help and feed their fellow human beings”.

This story teaches us a life lesson, i.e. we can experience happiness, abundance, and therefore a heavenly life only by looking after and supporting our fellow human beings.

We must undermine the popular belief that competition and selfishness can take us to success and happiness.

We should instead favor cooperation, altruism, and empathy for our fellow human beings.

This holds also in business, as a matter of fact the greatest entrepreneurs know that the best results come from serving customers in the best possible way, rather than being obsessed with profit.

They do not focus inwardly, but outwardly; they aim to find out how they can solve people’s problems and help them to make their life better.

In so doing, their own life changes for the better too.

What’s more, their business grows too because serving others turns out to be more profitable than aiming straight for profit.

So, if you are thinking of setting up a business, switch from a predator mindset to an altruistic one.

The feeling that comes from serving others is the key to a heavenly life, and the outcome is a profitable business.

2 thoughts on “GREED LEADS TO A HELLISH LIFE”