The clock is running fast, life is slipping away and we have to rush not to be left behind. Too many commitments, too many things to think about, too much of everything and we fail to “smell the rose”, i.e. enjoy and appreciate the beauty of life.

Does it sound familiar to you?

We all get caught up in our frantic life commitments and feel like our lives are flashing before our eyes.

The more our routine becomes a race, the higher the risk of getting lost in this crazy pace.

There will come a time when we realize that everything is getting out of hand and we are running out of time to appreciate what really matters.

Things such as a dinner with the family, our children’s growth, the sound of the waves, a picnic by the lake, a chat with a friend, or a hug from our parents.

We will miss these simple, but priceless things someday, more than our busy schedule and work-related commitments.

Remember: the beauty of life we fail to appreciate is hidden in the details we don't pay attention to!

If you are not a classical music fan you may not know who Joshua Bell is; let me tell you, he is one of the greatest violinists in the world.

He took part in a social experiment aimed to find out whether in a common environment, at a busy time we perceive beauty and stop to relish it.

What do you think happened when Joshua Bell wore a T-shirt and a baseball cap and played some of the best classical music pieces ever written in a Washington subway station at the rush hour?

How many people stopped to listen to him?

Please note that two days before his performance in the subway, Joshua Bell had sold out at a theater in Boston and the seat average was $100.

The Washington Post commented on this experiment as follows:

“Since it was the rush hour, it was calculated that thousands of people went through the station, most of them on their way to work.

Three minutes went by and a middle-aged man noticed there was a musician playing. He slowed his pace and stopped for a few seconds and then hurried up to meet his schedule.

A minute later, the violinist received his first dollar tip - a woman threw the money in the till and without stopping continued to walk. A few minutes later, someone leaned against the wall to listen to him, but the man looked at his watch and started to walk again - clearly, he was late for work.

The one who paid the most attention was a 3-year-old boy. His mother tugged him along, but the kid stopped to look at the violinist.

Finally, the mother pulled hard and the child continued to walk, turning his head all the time.

Several other children did the same, but all their parents forced them to move on.

In the 45 minutes, the musician played, only 6 people stopped and stayed for a while. About 20 gave him money but continued to walk their normal pace. He collected $32. When he finished playing and silence took over, no one noticed it.  No one applauded, nor was there any recognition.

On that Friday, January 2007, Joshua Bell was just another beggar, competing for the attention of busy people on their way to work.

One of the possible conclusions from this experience could be:

If we do not have a moment to stop and listen to one of the best musicians in the world playing the best music ever written, how many other things are we missing”?

Watch the video below and see by yourself how we are made to overlook the beauty of life by our fast-paced routines. 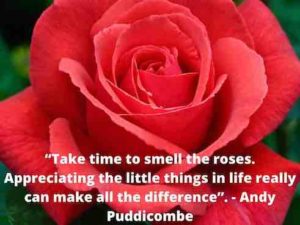 When we are in a rush the most likely result is that we fail to notice and appreciate the beauty that surrounds us.

In a world that feels more fast-paced and busier than ever, it’s easy to get swept up in the feeling of needing to do more, just to keep up.

But the trouble is, we spend so much time and energy trying to keep up and fit everything into our schedule that we cannot even enjoy what we are doing.

Life seems to pass us by without us fully living it, and in most instances, we realize it when we are old and we regret wasting our time.

However, it doesn’t have to be this way; we can choose to slow down.

By slowing down we can start appreciating the details that make life a masterpiece - from the smile of the people, we love, to the flower that blooms announcing Spring, to the performance of Joshua Bell disguised as a beggar.

Slowing down enables us to live in the present moment without losing sight of our life.

In short, it leads to a greater appreciation of life and a greater level of happiness.

Living a full and rich life is not about accumulating useless objects and having a diary full of commitments, but having the courage to select what makes us feel fulfilled instead.

By finding the time to fully devote ourselves to what we value we can finally enjoy every moment of our day-to-day life.