How often do we jump to conclusions, judging someone without knowing their personal story?

In this post, I want to pinpoint the main reasons why we judge people and how it can negatively affect the person judged and the person who judges too.

I have been judged by people many times.

Likewise, I have judged others even when I had never met them previously.

And this has occurred quite often.

Has it ever happened to you? I bet so!

I truly believe all of us judge others, and we are judged too.

I have been thinking a lot about this lately.

Why do we tend to judge others so much?

In my personal opinion, one of the reasons dwells in having low self-worth, in other words, a fragile ego.

When we have low self-esteem, the judgment instinct kicks in to make our ego feel better.

We tend to judge people as a reflection of what we feel or think about ourselves.

As Earl Nightingale once said: “When you judge others, you do not define them, you define yourself”.

The second reason why we tend to criticize others is that they are different from us.

They have different beliefs, opinions, ideas, and ultimately they act differently.

Judgment is part of human nature, it’s ingrained in our mind; we are tribal beings after all!

We used to live in tribes and those who didn’t belong to our tribe represented a threat.

In our modern society, we still want to fit in specific social ranks or groups.

Whoever doesn’t belong to our group is valued badly!

Just think for instance of the heated arguments between political parties, two opposite football teams, or different ethnic groups.

Even though thousands of years have gone by and we no longer live in tribes, our brain is still hardwired to perceive what is different from us as something bad and wrong, i.e. as a threat.

This is confirmed by the results of some functional neuroimaging studies of race-related prejudice.

We tend to judge people we perceive different from us!

We bring them down and we make them feel inferior so that we feel stronger than them.

As a result, we consider them less of a threat, which makes us feel safe.

We don’t think about it most of the time, we just do it unconsciously.

At the end of the day, it doesn’t really matter if we tend to judge people consciously or unconsciously because of our low self-worth or how different they look.

What matters is that we can easily end up hurting others and feeling hurt too.

Let me clarify what I mean through the following inspirational story.

THE FATHER AND THE SON 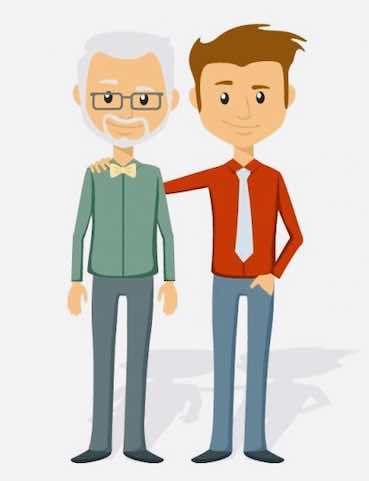 They were traveling on a coach packed with people.

Suddenly, the 20-year old guy looked out of the window and shouted excitedly: “Dad, what are those landforms in the distance”?

“Those are hills, my dear son”, the father replied.

“And, what are those big landforms beyond the hills and what are they covered with”?

“Those are mountains and there are plenty of trees upon them”, the old man explained to his son.

The people on the coach, astonished by this childish behavior, started paying more attention to the old man and his son.

They were intentionally listening to their conversation.

“Dad, Dad, what are those strange things in the sky?”, the young man asked.

“Clouds, darling, they are clouds”, the father replied.

They jumped to the conclusion that both the father and the son must have mental problems.

“They must be nuts!”, someone said.

Suddenly, the boy exclaimed again: “What are those drops falling from the clouds”?

“That’s the rain which enables the vegetation to grow and flourish and the trees to cover the mountains”, the old man replied.

One of the passengers could no longer stand this kind of conversation and shouted harshly at the old man: “What the hell is this? Why don’t you take your son to a doctor, so that maybe he will no longer bother people with his childish behavior”?

The old man, wiping the tears falling from his eyes, said: “My son and I left the hospital yesterday.

My son had been blind since birth and he gained sight only two days ago.

He was donated new eyes by a young guy who passed away.

That’s why hills, mountains, trees, and rain are all discoveries to him.

I do apologize for the inconvenience we caused”.

The passenger felt ashamed for jumping to conclusions when complaining about how the 20-year old guy behaved, without knowing his personal story.

Only then, did he realize how mindless he had been.

We should never judge and label anyone because everyone is different and has their own story.

As the old saying goes, don’t judge a book just by its cover.

“To judge a man by his weakest link or deed is like judging the power of the ocean by one wave”. - Elvis Presley

Judging someone without knowing them is a massive mistake.

You have probably experienced when somebody cuts you off in the street or honks the horn repeatedly, haven't you?

How does it make you feel?

If you are anything like me, you probably get frustrated and you curse at them, don't you?

But just think for a moment.

What if the person you fucked off because they cut in front of you or honked the horn was a doctor running to the hospital for an emergency?

You would probably respond differently, wouldn't you?

You would not shout at the doctor, on the contrary, you might appreciate their attempt to save someone else’s life.

So, before jumping to conclusions, think about the reasons why someone may be doing something you don’t consider right.

Before attacking them, put yourself in their shoes.

“Never judge someone until you've walked a mile in his shoes. That way, when you do judge him, you're a mile away and you have his shoes”. - Emo Philips

Instead of wasting time judging others, we should all aim to become the best version of ourselves, identify our own strengths and weaknesses, and work on them.

In other words, before jumping to conclusions and labeling someone from our own viewpoint we should take the time to take a very close look at ourselves because none of us is perfect, and everyone has their own personal story.

How can we rewire our brains to stop making internal judgments when we meet people?

Something I have been applying for a while and has turned out to be a powerful weapon to fight our inner judgmental instinct is to find at least three positive features about the person I judged.

Like every habit, it requires practice and persistence, but I promise you, you’ll feel way better, what’s more, you will connect to a deeper level to our fellow human beings.

Hope this post has been valuable, and I look forward to hearing about your progress in rewiring your brain and stopping judging people.

2 thoughts on “JUDGING PEOPLE WITHOUT KNOWING THEIR STORY IS HARMFUL!”