Once upon a time, there was a boy who had a really bad temper.

He was angry and unsatisfied all the time.

He used to be impulsive and treat every person in the same awful way, so he used to say anything that came to his mind without realizing how bad his words were, and how they hurt the people around him.

One day, during a family gathering, his grandfather witnessed a quarrel between him and the boy’s father.

The old man wrapped an arm around the boy’s shoulder and led him towards the back of the house, and there he handed a bag of nails and a hammer to his grandson.

“Why did you give me this stuff?”, the boy asked angrily.

“My dear, you will get to know the reason soon!”, the old man replied and then went on: “Every time you get angry and you quarrel with someone, take a nail from the bag and hammer it into the fence, and witness what happens”.

The intrigued boy decided to give it a try and find out what his grandfather meant.

For the first few days, he hammered plenty of nails, to the point that the bag got almost empty.

When he gradually learned to control his temper, the number of nails that he hammered into the fence also began to dwindle.

Soon the young guy was able to keep calm and control his bad temper.

The boy felt very happy and went to his grandfather to tell him the news: “Grandpa, at last, I no longer need to hammer nails into the fence since I no longer speak bad words or misbehave”!

“What have you learned?”, the old man asked.

“Controlling my temper and not getting angry is way easier than hammering those nails into the fence”, the boy replied.

“Well done! Now, my dear, take this screwdriver and pull out one nail each day you manage to hold your temper and not get angry”, the wise man suggested.

Days went by and when the boy removed the last nail, his grandfather told him: “Well done boy, but look at the fence; what do you notice”?

“The fence is full of holes, Grandpa”, the young guy replied.

“Exactly, and the fence will never be the same!”, the old man said, and then went on:

“When you get angry and say bad things to people, they leave a wound in their minds and hearts in the same way as the nails leave holes in the fence.

You can put a knife in a man and draw it out. It won't matter how many times you say I'm sorry, the scars will still be there.”

The boy turned to his grandfather and said: “Thanks, grandpa, for teaching me such a precious lesson. I’ve learned that my words have power, they have a tremendous impact on people, they can either build or destroy lives”.

The old man stated: “Forgiveness can come easy for some people, but the wounds caused by the past can leave scars in them that will never disappear”!

“Be careful what you say. You can say something hurtful in ten seconds, but ten years later, the wounds are still there”. - Joel Osteen 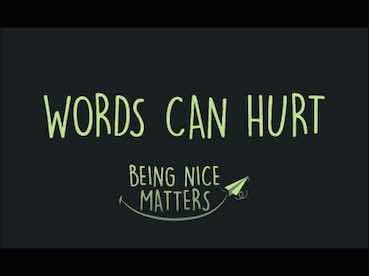 This story teaches a life lesson we should always keep in mind, i.e. our words are powerful weapons.

As the old saying goes:

“The tongue wounds more than a lance”!

This doesn’t apply only to the words we say to others, but also to those we continuously say to ourselves.

The words we use elicit emotions, build convictions, beliefs and ultimately lead us to act in a way that can be either empowering or disempowering.

“Words have magical power. They can bring either the greatest happiness or deepest despair; they can transfer knowledge from teacher to student; words enable the orator to sway his audience and dictate its decisions. Words are capable of arousing the strongest emotions and prompting all men’s actions”. - Sigmund Freud

In a nutshell, words carry much more than just sounds and meaning, they carry power, and they shape our lives.

Words can be double-edged swords, they can uplift a soul or tear it down.

They can take you “from rags to riches”.

They shatter dreams or make them come true.

“There are some people out there that won’t compliment anyone and to me, this is sort of selfish. A kind word may save someone’s life someday. Words are very powerful”. - Darlyne Linda

Next time, before you speak, choose your words carefully.

It will make all the difference!