Everyone would like to become successful, whether success means building a successful business, graduating with the highest grades at college, or building muscles; however, just a few are willing to do the HARD WORK to get there.

“A lot of people say they want to be great, but they are not willing to make the sacrifices necessary to achieve greatness”. - Kobe Bryant 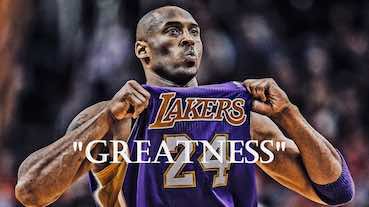 There are many keys to becoming successful, but there’s only one you cannot afford to go without if you want to experience success in any area of your life, and that is HARD WORK.

The key is taking responsibility for your life no matter how hard it may seem.

No matter what tests life throws your way, as long as you have a positive approach to HARD WORK success will be the byproduct of your commitment.

Putting work and time in is the formula that’s going to separate you from the crowd.

It requires you to sacrifice, to be willing to run yourself into the ground from time to time.

People see only the results, e.g. the beautiful body, the medals, the supercar, the multimillionaire villa, while they don’t see the time, the work other people have put in to achieve whatever they have accomplished.

They don’t see the dark moments successful people had to go through to stand where they are today.

Don’t be caught by the misbelief that you can easily succeed in life, otherwise you may hurt yourself very badly.

In the world of instant gratification we live in, the craving for quick results is definitely the main reason why so many people fail to meet their goals.

When you don’t meet your goals, your self-esteem diminishes as well as your confidence and this results in you giving up.

How often have you set a New Year’s resolution and then one year later you were back at square one, without even remembering what your goal was?

If you are anything like me and most people out there probably often.

In a series of studies, researchers from the University of Scranton who followed 200 people over a two-year period found out that:

- 75% were able to keep their resolutions for one week.

- Only 19% were successful in reaching their goal when researchers followed up two years later.

What’s interesting is that the 19% who were successful at keeping their New Year’s resolutions slipped, or made mistakes; namely, 71% of them slipped in the first month.

However, they didn’t quit after making a mistake, they doubled their efforts after the slip, and worked even harder.

This proves that HARD WORK always pays off; thus, you shouldn’t fool yourself expecting you can experience success by walking an easy path.

There are no shortcuts to becoming successful.

Let me ask you now:

Are you willing to work your ass off?

Are you willing to sacrifice to arrive where you want to go, become who you want to be, and get what you want?

If so, you are more than halfway close to your destination.

I want to stress what I stated above through the following enlightening story.

THE FARMER WHO KNEW WHAT HARD WORK MEANS 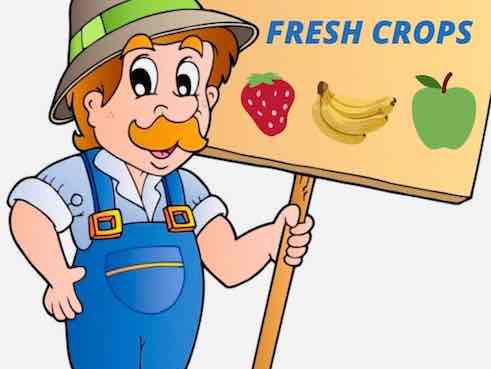 Once upon a time, there lived a farmer in a village.

He was a hard-working man.

Over years of sweat and labor, he had been able to become the best farmer not only in the village but in the entire region.

People came from far away villages to buy his crops.

Thanks to his hard work and sacrifice he had been able to build a fortune.

He had two sons who were strong and healthy, but they didn't like working; they were actually very lazy.

They spent all their time in idleness.

Years went by and the farmer became older and weaker, but still, he was the only one working in the fields.

On the contrary, his sons kept spending time sleeping, eating, and hanging out with women squandering all money the good soul of their father brought home.

The old man was really worried about his sons’ future.

“How can they ever provide for themselves if they don't know what making a living means if they don’t know that they can only reap rewards after a period of sacrifice?”, the farmer thought to himself.

The old man was ready to do whatever it took to teach the lesson to his sons and so, one day, he summoned them and said:

“My dear, I can see death looming.

Before I bid you goodbye I want to share with you a secret.

You know how hard I have worked all my life. Well, I have hidden my treasure, all my savings in my biggest field, but I do not remember where I buried them.

However, one thing is for sure; if you can find the treasure you will not need to work one day of your lives”.

The idea of not working for their entire lives was so tempting that they didn’t think twice.

They started digging as much as they could; they scoured every corner of the soil, but they couldn’t find anything, not even one coin.

“Our father must have got nuts and must have got confused about the field he buried the money in”, one of the two sons told his brother.

“Let’s ask him”, his brother replied.

“Dear father, we have followed your instructions but we couldn’t find your treasure”

“Darling, you're just halfway from finding it”, the old man replied.

The puzzled sons said: “What do you mean we are just halfway? Do we have to dig even deeper”?

“You’ll figure out what I mean, but before that, I need your help.

I am no longer able to plant the seeds, water, and look after them, so I want you to do this job for me”, said the old man.

The two sons listened to their father and for over six months they worked hard every day ensuring the crops grew strong and healthy.

Time passed quickly and it was soon time to harvest.

At that very moment, the two brothers had an epiphany.

They realized what their father meant.

They ran to the old man and they warmly hugged him, saying:

“Thanks so much, father; we have found the treasure; thanks for teaching us that HARD WORK always pays off”.

From that day on the two sons who were once lazy became hard workers like their father.

Before long they became the best farmers in the region as well as the richest.

This story brings with it a straightforward truth that is: If success was free and easy, everyone would reach it.

Be wary of those who tell you that you can transform your life in a short time, without working your tail off.

Be willing to get disciplined instead, to work harder than anyone else, like famous actor Will Smith. 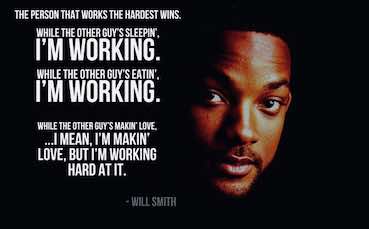 He credits his success to his willingness to work harder than anyone around him.

You see, while you are sitting on the couch, watching Netflix, or wasting time on social media there is someone else who is working their fingers to the bone.

There is someone out there who still wants to make their dreams come true, someone who is willing to work their ass off no matter what.

No athlete conquers a gold medal out of the blue.

They have to put in hard work and time.

No athlete can experience success without investing years in training, without getting their bodies ready to endure extreme fatigue, without developing the mindset of a winner and building the skills necessary to become a champion.

Likewise, successful entrepreneurs are not able to manage people effectively, find products and services that people love, launch enticing ad campaigns, and scale their business to the next level if they don’t put in the work and time necessary to acquire all the relevant skills.

The same principle applies to YOU – no matter whether you want to create a successful business, take part in a marathon, learn a new language, or improve your relationships - the more willing you are to put in the work and time, the more likely you are to become successful in what you are trying to achieve.

What’s more, the more HARD WORK you put in, the more disciplined you get to handle the ‘winter seasons of life’.

In other words, HARD WORK enables you to develop a strong network of roots, which allows you to withstand any storm that comes your way during your journey towards achieving your goal.

The key to success is as simple as that; sacrifice today for a better tomorrow. 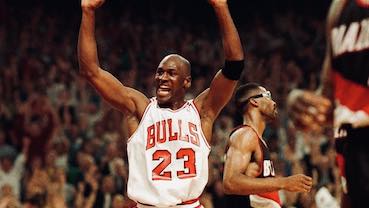 “I've always believed that if you put in the work, the results will come”. - Michael Jordan

Much like Michael Jordan, Kobe Bryant had the reputation for his hardcore work attitude.

He was relentless in his pursuit of basketball excellence.

He was the first one to arrive at the gym and at the basketball court in the morning and the last one to leave at night.

Jim Boeheim was one of the many coaches who was impressed with what he saw in Kobe Bryant.

“Kobe, from day one, is just the hardest-working player I’ve ever been around. He just does an unbelievable job. He came in, he worked out before practice and practiced harder than anybody and then worked out afterward and continued the whole trip”.

Now, don’t get me wrong I am not saying you have to work as hard as  Michael or Kobe, but can you see the opportunity?

Can you see the opportunity to become a winner by having a hard work attitude?

Just think for a moment what your life would be like in one year from today if you invested just one more hour a day into what you want to achieve.

How would your life be different if you invested one hour a day in your workout, or in learning new skills, or in your relationships?

I’ve been devoting an average of one extra hour a day to my personal development and if I look back one year I cannot recognize myself.

I’ve improved many areas of my life.

It has not been a walk in the park, but I am so grateful I started embracing a HARD WORK attitude.

Thanks to that my self-discipline and my confidence have skyrocketed, as well as my results and sense of fulfillment.

Now it’s YOUR turn too, don’t rest on your laurels, opt for a hard-working attitude that’s going to serve you for years to come.

It’s high time you paved the way for a successful future.

4 thoughts on “THE KEY TO SUCCESS – HARD WORK”