There's no such a thing as right or wrong. Right or wrong depends on what points of view we look at things from.

As the number 6 can be viewed as the number 9 from a different point of view, so does everything else in life. 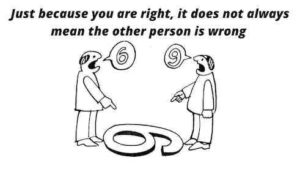 “Do what you think is right. Don’t let people make the decision of right or wrong for you”. - Steve Maraboli

When we take the time to view things from a different perspective we can begin to see beyond the concept of right or wrong.

At the end of the day, it's not about being right or wrong! Rather, about gaining experiences and finding our own path in life.

As I often do, I am going to tell you a story that can help clarify what I mean. 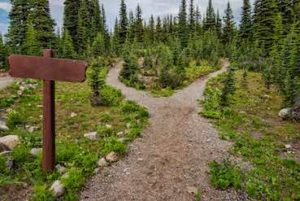 There were 5 friends, William, James, Ben, Isabel, and Maya who were traveling to a remote village when they got lost in woodland.

William decided to trust his gut and turn left, James, on the other hand, decided to turn right.

Ben chose to walk back on the same path that had led them there since he thought it was the safest.

Isabel decided to keep walking straight since she thought they were close to the village and they had already traveled a long distance.

Not knowing what to do, Maya chose to climb to the top of a tree to have a better view of the surrounding area.

She could now see which way was the shortest to get to the village.

Maya then took the shortest path, thinking to herself, “William, James, Ben, and Isabel should not have taken the paths they did”.

“I must be right, and they must be wrong. They don’t know where they are going”, Maya thought out loud - after all, she had a “bigger picture” of the situation they were in.

From her point of view she was right, BUT what about her friends’ perspectives?

Each one of Maya's friends had chosen their own path and gained a different experience!

William, who turned left, found a tortuous and long path, but it led him to the village anyway.

James, who turned right, had to face up to a Grizzly, but then he learned how to survive in the wild.

Ben, who went back, met another group of travelers and made new friends with whom he reached the village.

Isabel, who went straight, found a community of people who lived in the middle of nowhere and she decided to stop and have a sabbatical with them.

There she learned how to grow her own food, breed animals and how to produce renewable energy.

Maya, who took the shortest path, reached the remote village she and her friends had set out for in a few hours.

As a result, she could take part in the annual local feast her four friends were too late for.

Bottom line: the journey enriched each one of them in their own unique way.

Every decision we make offers us the chance to live new experiences.

These in turn add to our maturity and wisdom leading us to our own personal growth.

Therefore, there is no right or wrong decision you can make unless you are not happy where you are and you keep taking the same path over and over again.

If you don’t change your path, you won’t end up anywhere else, but where you are today.

What about taking a different route?

Like the 5 friends in the story, you would certainly live new experiences, meet new people, learn new things and ultimately end up somewhere else than where you are today!

Remember: the biggest regrets in life are not the decisions we make, whether they are “right” or “wrong”, BUT the things we don’t have the courage to do.

“Do not go where the path may lead, go instead where there is no path and leave a trail”. - Ralph Waldo Emerson