What do Nelson Mandela, Mahatma Gandhi, Steve Jobs, and Martin Luther King have in common? All of them have been great leaders! So, my next question is, what defines a great leader in your opinion?

These are a few of the many traits shared by leaders, but which one is necessary to be a great leader?

Read on and you’ll find the answer in the inspirational story below.

THE TEACHER AND A “SURPRISE BOX” 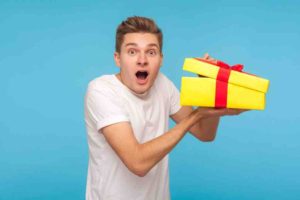 One day a teacher said to his students, “Guys, in this box I have a picture of one of the world's greatest leaders of all times.

I will reward whoever guesses who this great leader is”.

The students were enthusiastic and started saying names.

“Great!”, replied the teacher and then he went on, “What defines a great leader”?

Some of the students replied:

“A great leader is someone who leads by example”.

“Great leaders are those people who have a vision and share it with others”.

“A great leader is someone who has a positive impact on someone else’s life”.

“I want you to take a look inside the box and then pass it around so that everybody can find out who the great leader is”, the teacher said.

The students passed the box from hand to hand and each one of them, when looking inside, smiled.

The teacher then broke the silence and asked the student who was holding the box,  “What do you see in there”?

“I see a mirror, I see myself!”, the student replied.

“Ok, so what is the takeaway for you guys? What can we learn from this lesson?

A student replied, “There is a leader within each one of us”.

The teacher clapped and said, “The biggest enemy you have to deal with is yourself! Only one person can prevent you from being the best version of yourself, from achieving everything you can achieve.

That person is you!

You are the only one who can revolutionise your life, who can influence your happiness and your success, provided you believe in yourself!

Your life doesn't change when your boss changes when your career changes when the Government changes. Your life changes when you change, when you get beyond your limiting beliefs and you start believing in yourself. Everything changes for you when you realise that you're the only one who's responsible for your life”.

The world needs great leaders now more than ever before, allow yourself to be your best self.

It's time for you to believe in yourself and make this world a better place.

Have you figured out what the n.1 trait that defines a great leader is?

If not, here’s the answer, self-belief.

If you want to make things happen for you, you need to start believing in yourself.

You would never take action towards something you don't believe is possible.

You can have all the education and resources in the world - yet if you don’t have self-belief - they don’t make any difference.

If you don’t believe you can do it, you will never make it!

Do you think Nelson Mandela - Nobel Peace Price 1993 - could have put an end to Apartheid if he had not believed in himself?

Not a chance, he would have quit when he was unjustly imprisoned for 27 years.

Do you think Steve Jobs - Apple’s Visionary Genious & Father - could have revolutionised not simply the tech industry, but the lives of many generations without self-belief?

Not a chance, he would have quit when he was building in his garage what became his empire - a trillion-dollar company.

All great leaders have one trait in common, they believe in themselves, no matter what the people think of them.

There is no room for self-doubt in their minds. They keep following their dreams until they make them a reality.

Believe that you can do something great!

Even when there’s no evidence, the people close to you think it is impossible, and the shit hits the fan, keep believing in yourself!

Remember, the greatest achievements in human history are born from beliefs.

“Believe you can and you’re halfway there”. - Theodore Roosevelt

So, let me ask you, next time you look in the mirror, who will you see?

A nobody or a would-be leader?