Have you ever come across the old saying: “It’s better to give than receive”?

I believe in these two statements.

And I believe that every human being on this earth has a mission, i.e. contributing something to life, making a difference in this world, having a positive impact on someone else’s life.

Having said that, unfortunately, I hardly ever see gestures of pure generosity in my daily life.

Most people I interact with do something just because they expect something else in return.

It seems they are scared of being depleted if they give away something that belongs to them.

Most people are selfish and simply look for their personal success.

However, real success and happiness can be achieved only through generosity.

Have you ever experienced the beautiful feeling you have when you do something helpful for someone else without expecting anything in return?

It could be helping your elderly relatives, volunteering for organizations, offering emotional support to those around you, or donating to charities.

All these activities help others, but at the same time do you good.

There is evidence that the following health benefits are associated with “gift-giving” behaviors:

Therefore we can come to the conclusion that two sayings: “the more you give the more you get” and “It’s better to give than receive” have scientific grounds!

Be generous and you will be surprised how much will come back to you.

I will illustrate the above concepts by means of a story.

THE KING AND THE BEGGAR 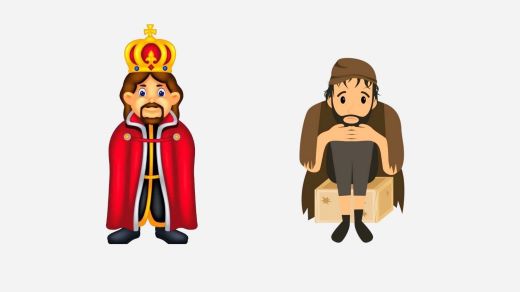 Once upon a time, a kind-hearted king who didn’t have any heirs decided to invite all his subjects to the palace to choose his successor.

He announced that to ascend to the throne the successful candidate must have an open heart and put his fellow human beings first.

A poor man heard the announcement and decided to go and have a go.

He was so concerned about making a good impression on the king that he spent all his savings to buy a new coat.

Once he was at the gates of the palace, he noticed a beggar who was asking for help.

“Please help me, I am so cold and hungry” the beggar was shouting to the crowd.

Everyone walked past without even looking at him, except for the poor man in the smart coat.

He didn’t think twice: he took off his new coat and gave it to the beggar, he also handed him the little food he had.

The beggar thanked and left the road.

The poor man was now hesitant to meet the king since he was covered in rags, but in the end, he entered the palace.

When he was summoned by the king he almost fainted.

But much to his surprise, he noticed that the king was wearing the coat he had given to the beggar.

The king smiled at him and said: “Yes, dear son, I am the beggar that you helped”.

“Why were you begging in the street? You are a king!” said the poor man.

The king replied: “I wanted to make sure to find a generous person, someone who loves their fellow human beings and could be my successor.

You were the only passer-by who stopped and gave something precious to a beggar who could not reciprocate your kindness.

This gesture of generosity proved you have a great heart, and you deserve to inherit my kingdom.”

When you make a difference in life, life is going to reward you somehow.

Get used to contributing to someone else’s life on a daily basis and you will witness how your life is going to change.

One gesture of generosity a day is enough to contribute to life.

Something simple such as a hug to your family members, a call to an old friend, an hour spent keeping company to someone in need, etc, it’s what our greedy society needs most now.