In the society we live in most people are too often in a rush, and when we run it is really easy to not pay attention to what we think.

That’s the rub because our thoughts shape our life.

We are what we are because of what we have been thinking.

Our thoughts lead to feelings, which lead to actions, which in turn lead to results, which reinforce the initial thoughts and beliefs.

It’s of paramount importance to get utter clarity of this cycle. 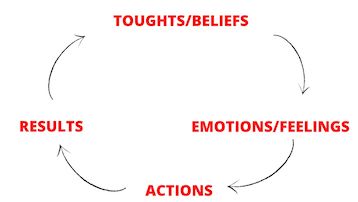 To make it even clearer, let's look at an example:

You are in a job and your manager points out small mistakes you make that are not detrimental to the completion and success of your work.

He never highlights your strengths, i.e. your determination, commitment, engagement with the team, etc.

Your thought might be: “The manager doesn’t like me, he has a grudge or something against me”.

You start feeling mistreated and sad, you try to avoid interaction with him as much as possible, after all, he doesn’t like you, so why should you look forward to meeting him?

As a result, in time, you make more mistakes at work.

You strengthen your initial thought and belief: “The manager doesn’t like me, he has a grudge or something against me”. 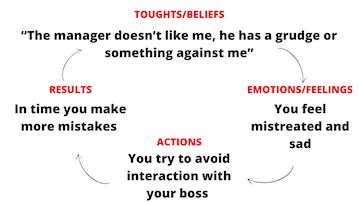 Another thought that could arise within you might be: “I am not good enough for this job, I am careless, even my colleagues think I am useless”.

You start feeling lonely and angry and you start to isolate yourself, you are fed up with anyone and everything related to your working place.

As a result, in time, you make even more serious mistakes.

You strengthen your initial thought and belief: “I am not good enough for this job, I am careless, even my colleagues think I am useless”. 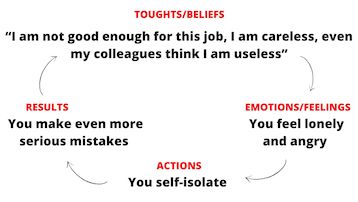 Do you get the point? 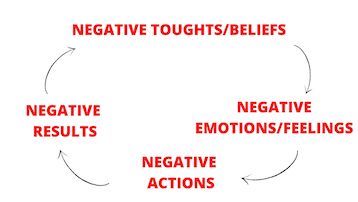 In order to break the negative cycle, you must question your initial thought before it determines your emotions and feelings.

You have to weigh out the evidence that is for and against your initial thought. 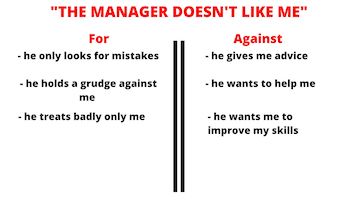 If you find evidence AGAINST the initial thought, you are realising that you might have been wrong in the first place and this allows you to replace the first thought with more factual thought-based evidence.

So when the manager points out any mistakes you might make, instead of ending up thinking straight away: “The manager doesn’t like me, he has a grudge or something against me”; shift your focus!

You might wonder: “What did I do wrong and why”?

In doing so you raise your curiosity, you feel curious and you might ask your manager and colleagues for advice in order to avoid making the same mistakes again. 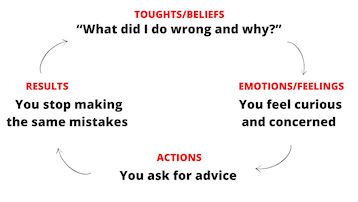 Another thought that could arise within you might be: “This is a really good team, everyone wants to support each other”.

You start feeling happy and confident and you get all your tasks done right.

As a result, you get promoted.

You strengthen your initial thought and belief: “This is a really good team, everyone wants to support each other”. 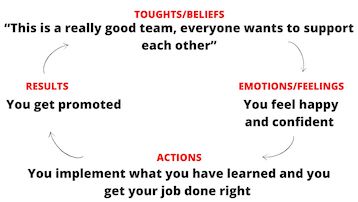 We have shifted from a vicious circle to a virtuous one! 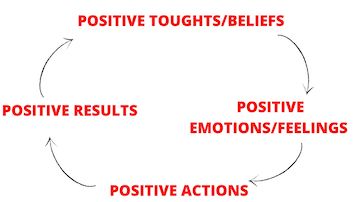 TAO STORY: ONLY A BOWL OF RICE, ONLY A DIFFERENCE OF THOUGHT 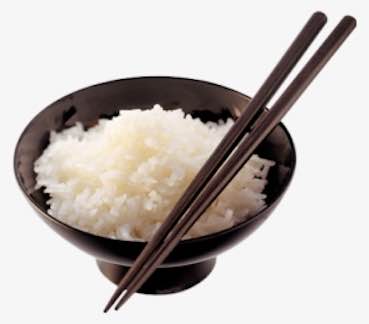 Once upon a time, there was a wise Master known for his ability to answer the most tricky questions and provide solutions.

One day two young guys showed up at his dwelling.

They worked for the same company, and both were dissatisfied with their job.

One of them broke the ice and asked the Master: “We work together and we are both mistreated by our managers and colleagues. Our commitment is not recognized”

What should we do? Should we resign?”

The Master paused, closed his eyes in meditation and when he opened his eyes again he uttered five words: “ONLY A BOWL OF RICE”.

The two friends were bewildered by the reply they got, they thanked the Master and set out for their city.

On their way back both guys were silent, just thinking about the five words the Master had told them, till one broke the silence and asked: “What do you make of the Master’s reply? What did he mean?”

The other one was still pondering when he suddenly said: “It’s evident that the bowl of rice corresponds to our daily meals”.

The other friend agreed with him: “Yes, what the Master meant was that our job is nothing more than a medium to make a living”.

Even if they agreed with each other, the two friends made different choices.

One decided to keep working in the same place, while the other guy resigned and moved from the city to the country.

He became a great farmer and over the years his fruits and vegetables were considered the best you could ever find.

His friend, who stayed in the same company, also succeeded in his job, he got promotion after promotion till he scaled up and became manager of the firm.

One day the two friends came across each other and they realized that despite having taken two completely different paths in life, their decisions were based on the same reply from the Master.

What’s more, both of them had become successful, and this raised some questions:

“Which was the better choice? Keeping working in the company or resigning?”

The friend that became a manager asked: “Why did you resign?”

The farmer replied: “I took the Master’s words literally, the job I was in was nothing more than the medium to have my daily meals, so why should I have stayed in a place that made me feel miserable just for a bowl of rice?

For me quitting the job was the obvious choice”!

The farmer then asked his friend: “Why did you keep working in the job you hated”?

The manager laughed and said: “I think the answer is obvious too, the job is nothing more than a bowl of rice, so why was I getting so distressed?

As soon as I became aware of it, there was no need for me to get distressed anymore.

I stopped letting my job heap abuse on me anymore, and I stayed. Was it not what the Master meant?”

Both friends were way too much confused and so they agreed to go back to the Master.

They were determined to get to the bottom of it once and forever.

They asked the Master: “What was the real meaning of the advice that you gave us many years ago?”

The old wise man paused, closed his eyes, and, on reopening them, he uttered again five words only: “ONLY A DIFFERENCE OF THOUGHT”.

Even if in this story both friends became successful, it doesn't mean that this is the most common scenario in our daily life.

In real life, the decision to turn left or right at an intersection can determine if we will achieve or not our goals.

So, let’s stress it once more: thoughts lead to feelings, which lead to actions, which in turn lead to results, which reinforce the initial thoughts and beliefs.

If you want different results, change your way of thinking.

I was in the same situation as the two friends, working in a job I was not passionate about, working long hours just to pay the bills, with no spare time to do what I love and to spend with my loved ones.

I took the same path as the farmer, I reinvented myself.

I invested in my education to acquire and master digital skills and surf the digital economy we are in.

I have built my own online business, which I am really proud of and which is paving the way for a lifestyle with more FREEDOM & FLEXIBILITY.

Have you also been in the same situation, i.e. Have you had to choose whether to keep working in the same job or change it?

I am looking forward to hearing about your experience and what kind of thoughts led you to where you are right now.