Every action, word, or thought has a consequence on our lives and on the lives of others. Even if you don't realize it or you don’t take it seriously enough, you can make a difference in someone’s life.

Furthermore, you have the opportunity to help others and make their life better.

So, the question to ask yourself is no longer whether you want to make a difference or not, but, what kind of difference you are making.

I don't know what your destiny will be, but one thing I know: the only ones among you who will be really happy are those who will have sought and found how to serve”. - Albert Schweitzer

You don’t need to go over the top to make a difference in someone’s life!

A simple gesture of kindness - in the selfish society we live in - can uplift people and give them new hope.

A smile, a call to a friend you have not heard from for a while, your help to someone in need, all these actions make a huge difference; believe me.

In a nutshell, even the smallest act can significantly impact someone and their outlook on life.

On this note, I want to share with you a story I came across recently.

It touched a chord with me and inspired me to show up in the best possible way to the people around me so that I can leave my mark on them.

Perhaps, it will have the same effect on you. Who knows?

THE FATHER WHO NEEDED HIS SON 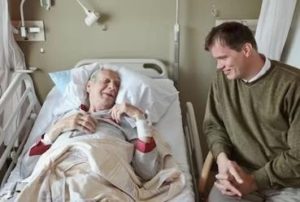 A nurse took the tired, anxious serviceman to the bedside.

“Your son is here”, she said to the old man. She had to repeat the words several times before the patient’s eyes opened.

Heavily sedated because of the pain he was experiencing, he hardly saw the young Marine standing outside the oxygen tent. He reached out his hand. The Marine wrapped his toughened fingers around the old man’s limp ones, squeezing a message of love and encouragement.

The nurse brought a chair so that the Marine could sit beside the bed. All through the night, the young Marine sat there in the poorly lighted ward, holding the old man’s hand and offering him words of love and strength. Occasionally, the nurse suggested that the Marine move away and rest for a while. He refused.

Whenever the nurse came into the ward, the Marine was oblivious to her and the night noises of the hospital – the clanking of the oxygen tank, the laughter of the night staff members exchanging greetings, and the cries and moans of the other patients. Now and then the nurse heard him say a few gentle words. The dying man said nothing, only held tightly to his son all through the night.

Along towards dawn, the old man died. The Marine released the now lifeless hand he had been holding and went to tell the nurse.

While she did what she had to do, he waited.

Finally, she returned. She started to offer words of sympathy, but the Marine interrupted her, “Who was that man?”, he asked.

The nurse was startled, “He was your father”, she answered.

“Then why didn’t you say something when I took you to him”?

“I knew right away there had been a mistake, but I also knew he needed his son, and his son just wasn’t here. When I realized that he was too sick to tell whether or not I was his son, knowing how much he needed me, I stayed".

You don’t need to get that far; you can manifest your personal power and generosity at any time.

There are many things you have control over, your actions, reactions, what you say, the way you treat others, and all of them have a repercussion on the outside world.

Even the slightest action taken by a person can have wide and distant resonance.

This is known as the butterfly effect, according to which the flapping of a butterfly in New Mexico can cause a hurricane in China.

In other words, a very small change in initial conditions can create a significantly different outcome.

It may take a long time, but the connection is real.

Remember that the way we treat each other is like the butterfly's flapping wings.

If you affect a person today with your positivity, that person can very likely influence another person, and so on.

You may be the spark of a wave of positivity and inspiration simply by taking a small step.

Like the wave at the sporting event that begins with one person and then all the others follow. However, make sure that, if a wave starts, it is positive.

“Never doubt that a small group of thoughtful, committed citizens can change the world; indeed, it's the only thing that ever has”. - Margaret Mead

Helping an elderly neighbor with errands, exchanging a few words with someone who is alone, or even simply saying “I love you” - can make a difference in someone’s life.

So, put aside your ego and devote yourself to your fellow human beings. The world needs people like you and me to make this planet a better place.

Let me know in the comments below what you will do, starting today, to make a POSITIVE difference in someone’s life.

Be inspired and inspire others